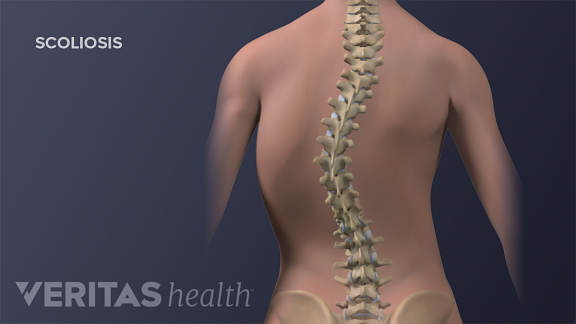 Scoliosis is a condition in which the spine becomes rotated and curved sideways.
Read Scoliosis: Symptoms, Treatment and Surgery

More than 80% of idiopathic scoliosis cases develop in adolescence.1 The reason for this is not fully understood, but the body’s faster rate of growth during this period is commonly suspected of playing a role. Similarly, once an adolescent reaches skeletal maturity, a scoliosis curve that is less than 40° is unlikely to keep progressing. For this reason, a key factor in treating scoliosis is to identify the condition early and, if needed, prevent the curve from reaching 40° or more by skeletal maturity.

2. Scoliosis can be easy to miss

Especially in the beginning, scoliosis may have no noticeable signs or symptoms. An official scoliosis diagnosis is considered when the measure of the sideways curve, called the Cobb angle, becomes 10° or greater. However, a person with a curve of 10° or even 20° is likely not to notice it. As a scoliosis curve progresses, it is more likely that it is first noticed during a regular checkup with a pediatrician or at a school screening. In some cases, a parent or friend may notice that the child has an abnormal sideways curvature of the spine when the back is exposed, such as while wearing a bathing suit or changing in a locker room.

3. Active treatment is not typically needed

Even though scoliosis is the official diagnosis for a sideways curve of at least 10°, most of these curves do not progress enough to cause problems or require treatment. For the vast majority of people with idiopathic scoliosis, a doctor’s evaluation every 4 to 6 months until skeletal maturity is sufficient to manage the condition. As long as the curve does not reach 25° or 30°, and does not progress more than 5° in 6 months, it is not considered high risk for getting worse.

If a scoliosis curve has reached at least 25° and significant amounts of skeletal growth remain, a brace may be recommended. Currently, rigid braces are the only nonsurgical treatment that has proven to slow the progression of scoliosis and reduce the likelihood of considering the option of surgery.2–3 While some studies have shown that some types of exercise may reduce or slow curve progression, the evidence is weaker and more research is needed.4–5

5. Surgery is the treatment of last resort

In rare cases when idiopathic scoliosis continues to progress past 45° or 50°—such as when bracing isn’t tried or didn’t work—surgery may be considered. A posterior spinal fusion is the most common surgery to correct scoliosis. While the outcomes for this surgery tend to be good and the procedure is relatively safe, it is still a major surgery. Scoliosis surgery may have an extended recovery period that can last 6 to 12 months, as well as risks for infection, excessive bleeding, and other complications. If a scoliosis curve has yet to reach 45° or 50°, the potential benefits of surgery are unlikely to outweigh the risks.

While most cases of scoliosis remain mild, it’s comforting to know that today’s treatment options in bracing and surgery are better than they were a few decades ago. And remember, exercise in general is still a good idea for improving the back’s strength, flexibility, and posture if advised by your doctor.

Controversy Over Whether Bracing Works